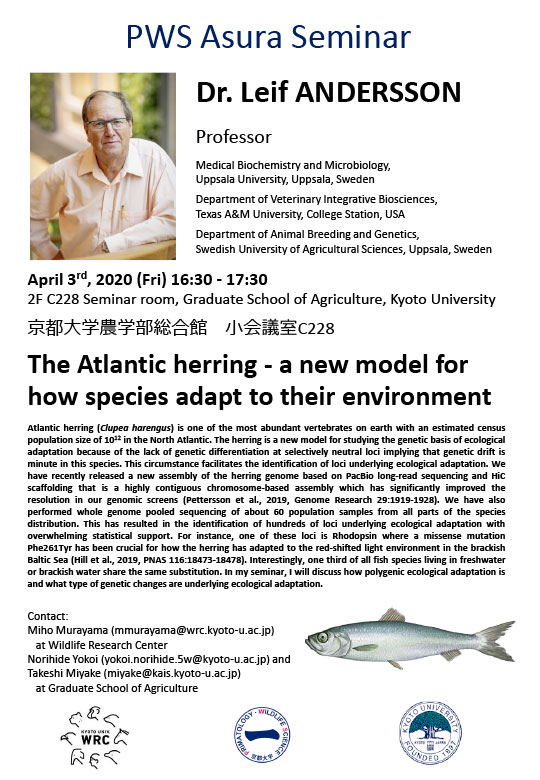 Atlantic herring (Clupea harengus) is one of the most abundant vertebrates on earth with an estimated census population size of 1012 in the North Atlantic. The herring is a new model for studying the genetic basis of ecological adaptation because of the lack of genetic differentiation at selectively neutral loci implying that genetic drift is minute in this species. This circumstance facilitates the identification of loci underlying ecological adaptation. We have recently released a new assembly of the herring genome based on PacBio long-read sequencing and HiC scaffolding that is a highly contiguous chromosome-based assembly which has significantly improved the resolution in our genomic screens (Pettersson et al., 2019, Genome Research 29:1919-1928). We have also performed whole genome pooled sequencing of about 60 population samples from all parts of the species distribution. This has resulted in the identification of hundreds of loci underlying ecological adaptation with overwhelming statistical support. For instance, one of these loci is Rhodopsin where a missense mutation Phe261Tyr has been crucial for how the herring has adapted to the red-shifted light environment in the brackish Baltic Sea (Hill et al., 2019, PNAS 116:18473-18478). Interestingly, one third of all fish species living in freshwater or brackish water share the same substitution. In my seminar, I will discuss how polygenic ecological adaptation is and what type of genetic changes are underlying ecological adaptation.