※ Please note that we will have
- guidance on May 17,
- preparation for presentation on June 01,
- presentation of the results of the courses at international symposium on June 05. 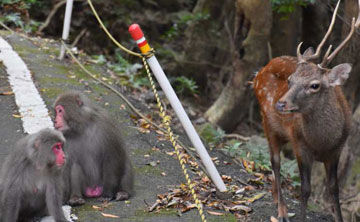 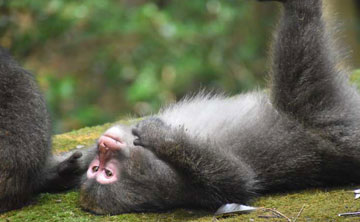 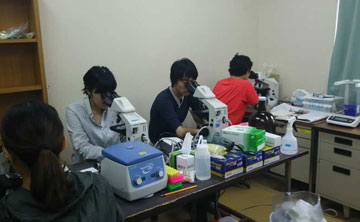 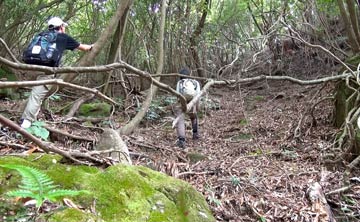 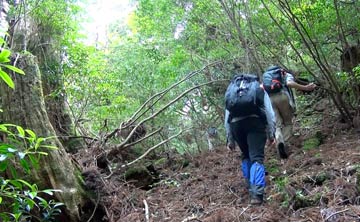 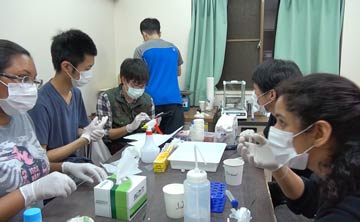 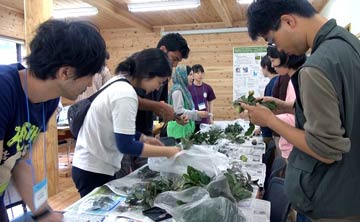 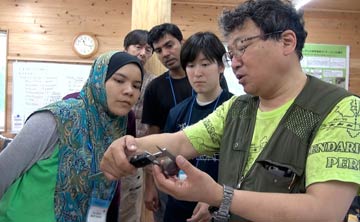 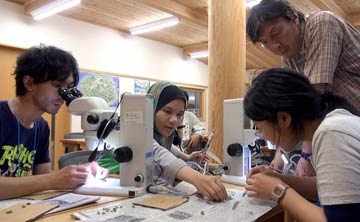 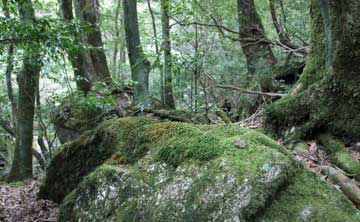 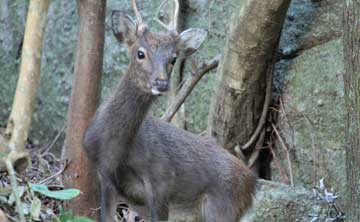 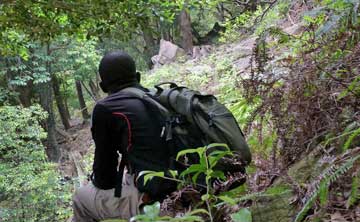 Application Form.docx Even if you have attended this course in the past, you are more than welcome to join again. We hope to see more applicants.
Deadline
September 13, 2015
Participants
About 20 graduate students of Biological Science, Kyoto University
About 6 teaching staff, including professors, post-docs and graduate students who study in Yakushima and/or the subject species
Groups
We form into two groups, deer and plant groups, and each group engages in different tasks. Choose your first and second preferences for group assignment. Please note that we cannot ensure your first preference due to capacity limitations.

A) Deer group
Deer feces as a source of added information to enhance population census data
Fecal pellet counting is a conventional census technique used in wild ungulate populations to estimate their abundance. The value of the data would be much improved if we could obtain more information from the feces that were counted in the census. Participants will collect fresh feces while following habituated deer individuals in the forest, and examine the whether variation in fecal pellet size is correlated with the animal’s biological characteristics observable in the field, such as body size, age, sex, and reproductive status. The fecal samples will be used for molecular analyses of DNA and hormones to determine sex, individual, and reproductive status of the deer in the following Genome Science Course. The correlations between observable characteristics in the field and molecular profiles determined in the laboratory may contribute to interpreting results achieved during the population census.

B) Plant group
Species composition and phenology in fern gametophyte
Ferns that we typically observe in forests are in their sporophyte (胞子体) stages. Compared with sporophytes, fern gametophytes (配偶体) are very small, about 1 cm at most in size, and to date no sufficient morphological characteristics useful for species identification have been identified, as is the case for other tiny characterless kinds of organisms. Recently, however, developments in molecular analysis are shedding light on species identification for these small organisms. This year, the plant team focuses on studying phenology of fern gametophytes in Yakushima. We plan to collect gametophytes from several places and compare their species compositions to that of samples collected in the other seasons during the previous year. 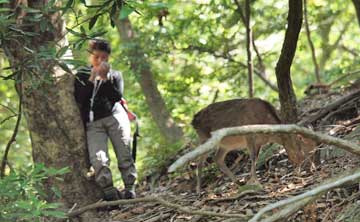 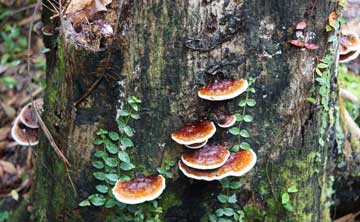 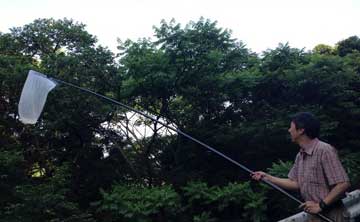 "Field Science Course" aims to train students to do fieldwork on the UNESCO World Natural Heritage Site on Yakushima Island, Japan. Young scientists from abroad and graduate students in Kyoto University attend the course together, using English as an official language.

"Genome Science Course" aims to train students in the molecular biology, from rudimentary DNA sequencing techniques to the analyses of high-throughput next-generation sequencer data. In this course, various samples collected in the preceding “Field Science Course" will be analyzed. Through the two courses, students will experience the whole process of scientific research, sampling in the field, analyzing in the laboratory, conducting data analysis and presentation of the results. Three ‘beginners' courses and an ‘advanced' course will be provided.

In the Field Science Course, students will learn the fundamental methods to study the ecology and behavior of various wild animals. We stay in a small village, having local food. We hope you enjoy the nature and culture of Yakushima Island.

We form four groups: monkeys, insects, mushrooms and deer. Each group will engage in different tasks. Choose your preference of the groups, from first to fourth. Please note that we cannot ensure your first preference, due to limited capacity of each group.


A) Monkey group
Ecological role of monkeys in yamamomo seed dispersal: Are they true dispersers?

We will observe wild Yakushima monkeys (Macaca fuscata yakui), one of the endemic species on Yakushima Island. Monkeys in the western coastal area are well-habituated to human due to long-term studies since 1975. While Yakushima monkeys are thought as a seed disperser of drupes, it has also been reported that they sometimes crack the seeds.

Through behavioral observation and fecal analysis (e.g., counting cracked/intact seeds in feces), we will discuss the ecological role of Yakushima monkeys in seed dispersal. Particularly, we will focus on fruits of yamamomo (Myrica rubra), the main food item for the monkeys during the course. We will evaluate whether the monkeys are seed dispersers or seed predators for yamamomo trees.

Insect ecology is very diverse. Some insects may fly, walk on the ground, gather on flowers, gather near light, etc. In the insect group, we will learn how to collect such various types of insects and learn how to identify those insects to their family or genus classification.

During the practical fieldwork of 2013 and 2014, we collected the feces of Yakushima macaques that ate insects. We collected the feces in hopes of being able to identify the insects’ DNA contained inside the feces. However, there were very few DNA data found in the feces, which resulted in insufficient analysis. Therefore, the goal of this year’s Genome Science Course will be to instead collect the insects that are likely to be eaten by the Yakushima macaques, and conduct a mitochondrial DNA sequencing in order to create a DNA barcode database of those insects. We will mainly collect insects at lowland broad-leaved evergreen forests.

We will collect DNA samples from feces of Yakushima deer, a subspecies of sika deer (Cervus nippon yakushimae). Using these samples, we will try to identify the individual of the host in the genome course. We will collect DNA from fresh feces of identified individual to examine whether we can identify individuals from DNA. We also collect DNA from feces whose hosts are unknown, to estimate the density of deer. Note that fecal sampling of deer may demand endurance and we may walk in hilly mountain areas for long distances. 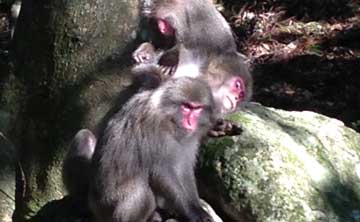 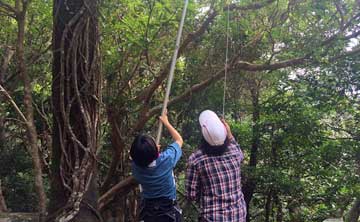 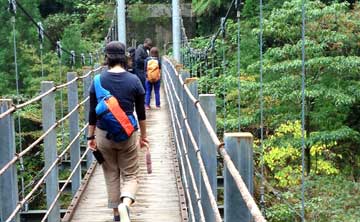 July 31
Deadline of the application
Early August
Notification of successful applicants
October 9
13:00- Guidance for the course at PRI seminar room 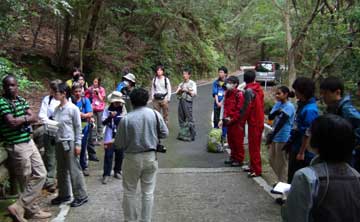 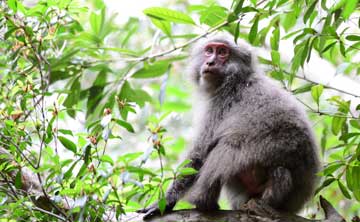 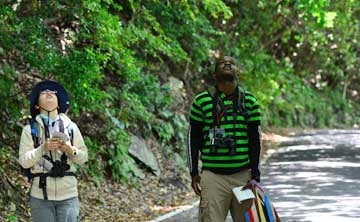 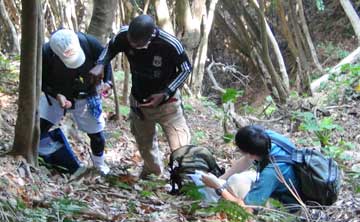 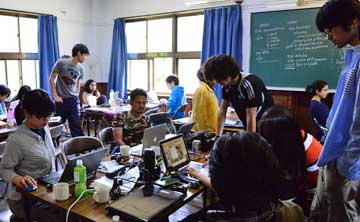 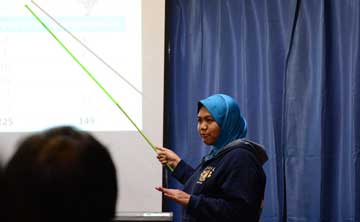 “Field Science Course” aims to train students to do fieldwork on the UNESCO World Natural Heritage Site on Yakushima Island, Japan. Young scientists from abroad and graduate students in Kyoto University take part in the course together, using English as an official language. In this course, students will learn the fundamental methods to study the ecology and behavior of various wild animals. We stay in a small village, having local food. We welcome students who are interested in the nature of Yakushima, and culture of Japan.
Introduction

We have four courses, monkey, insects, plants and deer (and other mammals’) feces. Please choose your first to fourth preference of the course. Please note that we can not ensure your first preference, due to capacity of the courses.

A) Monkey course
Yakushima monkeys or Yakushima macaques (Macaca fuscata yakui) is a subspecies of Japanese monkeys (Macaca fuscata fuscata) endemic to Yakushiam Island. Monkeys in the western coastal area on the island have been studied since 1975. They are well habituated to human, individually identified, and can be observed closely. However, it may be difficult for beginners to follow them in the steep mountains. Please try to follow monkeys, navigating in the mountainous forest by a compass and a map with lectures.
We will observe foraging behavior of monkeys to estimate their diet by direct observation. We also collect foods remained by the monkeys and their feces of monkeys and estimate their diet and genetic variation from feces. If possible, we will collect feces from identified individuals. To do this, you need to identify monkeys, follow them and watch the moment they drop. We also observe foraging behavior of monkeys to estimate their diet by direct observation. When they are not foraging, you can observe social behavior such as grooming.
B) Insect course
We will collect insects as potential foods of Japanese monkeys and determine their DNA sequences for DNA bar-coding. In the last Field Science Course, we tried to identify insect species contained in feces of Japanese monkeys by DNA bar-coding. Unfortunately, however, we found that DNA sequences of insects are too short to determine the insect species in the feces. Therefore, we accumulate DNA data of insects and make DNA database of insects in Yakushima Island in the long term.
C) Plant course
Yakushima Island has the highest peak in Kyushu area, Mt Miyanoura-dake (1963m ASL). This steep gradient from the sea to the over 1900, produces diversity of plant species. This island has heavy rain fall, ranging 4000-8000 mm per year, and produces rich fern species.
In the plant course, we study diversity of fern and its basic data. For this purpose, we will identify ferns morphologically, both in the spore forming and vegetative growth stages, in the several sites on the island. We also collect samples for DNA bar-coding, which will enable us determine species of ferns, which are difficult to determine morphologically and those in the vegetative growth stage. These data will also provide a reference for foraging of ferns by mammals.
D) Deer (and other mammals') feces course
Weasels in Yakushima have not been studied well and their information is quite limited. In this course, we try to increase basic information of weasels on the island. We search feces of weasels in the forest and estimate their diet and genetic variation from feces. Direct observation of weasels is difficult and we set some automatic camera to record weasels.
We opportunistically observe monkeys and deer while we searching feces of weasel.
Application
Please read Introduction.pdf, and submit Application Form to Ms. Maekawa (maekawa.youko.8e [at] kyoto-u.ac.jp) by April 18, 2014.
More info
・Introduction.pdf
・Application Form.doc
・Reports on the past program: Global COE website
・Reports on the past program: Field Science Course 2010, including reports